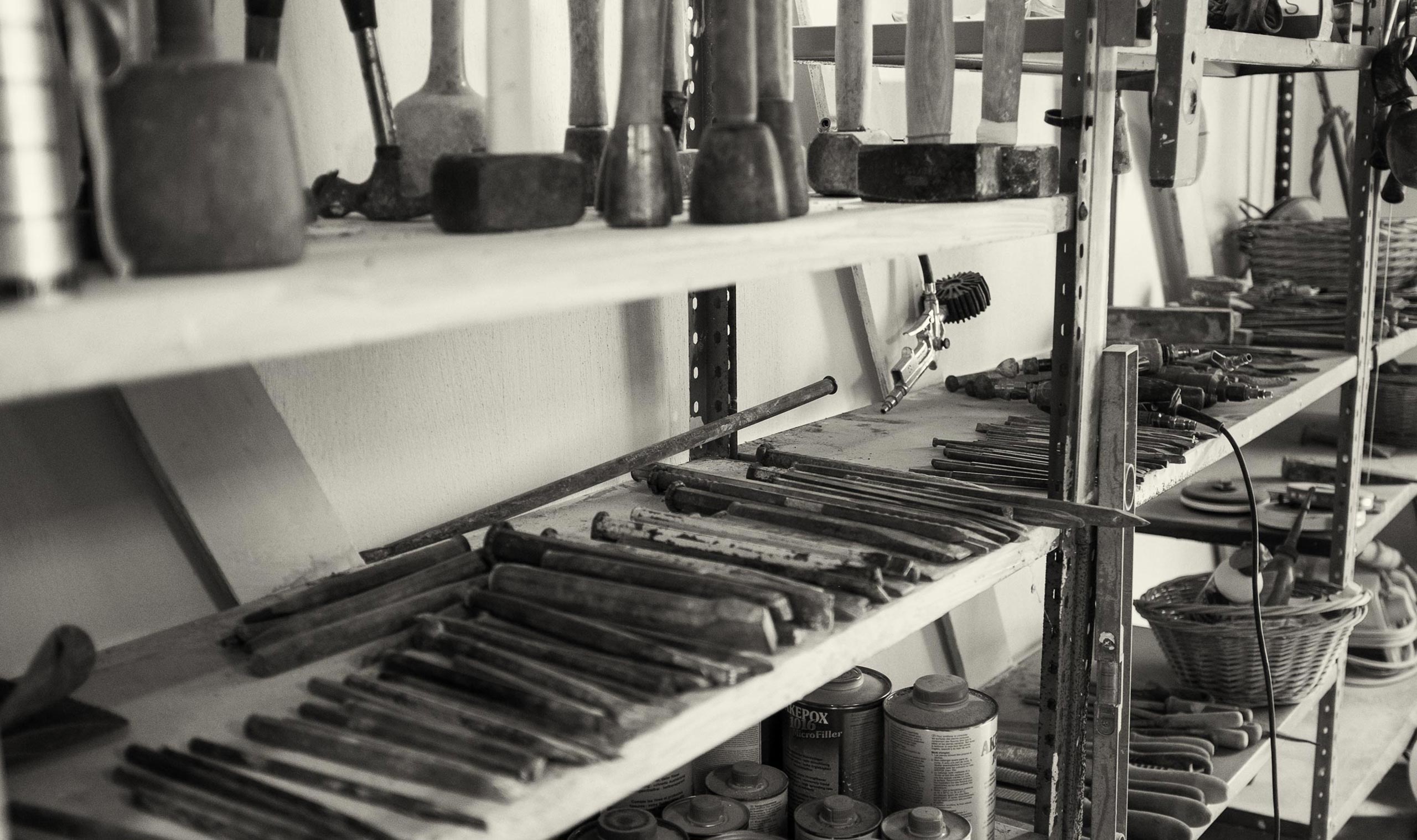 A piece of stone, formed a hundred million years ago, worked now, could still be here in another hundred million. Who would see it? What would they see?

The stone is hard. It takes diamonds to cut it. I can hurl myself at a piece of stone, full strength, with hammer and chisel and not a lot happens. I do that a few times, and it will accept a small mark. It’s strong, wild, ancient and it has a cold dark heart.

The stones seem to exist in an utterly different way to us, so slow, so silent and so long-lived; but to me they’re kinds of ancestors. They are made (like us) of particles that were born in starbursts, in galactic winds, in that first big bang. They participated more closely in the formation of the earth. There’s a poetry in them, in their impossibly long slow dance. They were here before and will be after us. They show their history, and thereby ours, and the earth’s and the universe’s.

Some stones ring or sing when I knock them with the right thing. The sound they make will tell if the stone is sound, solid, flaw-free, good to work, a quality that can be completely musical.

The exterior of a piece of stone is often a disguise: old, dull, weathered: but after a few hours of polishing, its surface shifts and reveals an extraordinary world of colours, whirls, stripes, dots; configurations of inhuman complexity and beauty.

Certain stones, when I break them open, give off a quick flash of stink, of sulphur, or petrol, or the ocean, (seaweed? old fish?). I know as I fill my head with the brief whiff of stony breath that the smell was sealed away, over how many millions of years ago?

Sometimes I’ll polish a piece of stone and it’ll gradually show a semblance of water, or the night sky, or flames, or honeycomb, or feathers, or snakeskin, or clouds, or melting ice cream and I am delighted and surprised, charmed.

In the past, stone was used to tell stories, to let people know about the Gods and Queens and Princes, the athletes and victors, the famous and the glorious, the vanquished and the foes. Stone was the best material to serve man’s grandest ambitions. I don’t want to make the stone my servant: a much bigger wilder story can be shown by the stone itself, of its history, of the earth’s, and the universe’s: the geologists of the C19th read in the stone a better explanation of our origins than the fabulous mix of myth, poetry, and history told in Genesis. Perhaps I use the human form to introduce people to the stone itself, so it can tell its story, which is part of my story, our story.

The word angel is derived from the Sanskrit Anjiras, meaning messenger from the gods to man. It seems to me that stones can also be seen as messengers from the gods. They are carrying information from our past, our creator.

The stones whisper to us about things older than we can conceive, gloriously mysterious, yet they are hard, and real; I can touch them with my hands, look into them with a microscope. Here, now, I make my marks on them, and then they carry on with their journey. Some of these stones are over 3 billion years old, and it is just possible that they could last for another 3 billion, becoming then messengers from us.

The looks on the faces of the angels are not planned as such, they arrive and surprise me often with their softness and sadness, and strength and calm. But like all good angels, they have a certain graveness, an objectivity, a touch of the infinite, and a certain compassion.

The discs, lunar or solar, are also like angels, heavenly bodies, stars, whirling in dark space, carrying information about our origins and throwing out light to us.

The great discs of our solar system, the planets, our moon, the sun, are embedded deep in the history and creation of our planet. The Disc is the mother of all shapes, primal and ubiquitous, responded to by all life forms in the shape of the sun, the disc of light, photons streaming through to all of us here on earth. And galaxies are spiral discs, and in sub atomic physics, innumerable tiny circles dance and jiggle together, and in our our solar system we whirl together in great swooping cycles around our mother sun.