A stone story:
Notes on working with stone in the 21st century 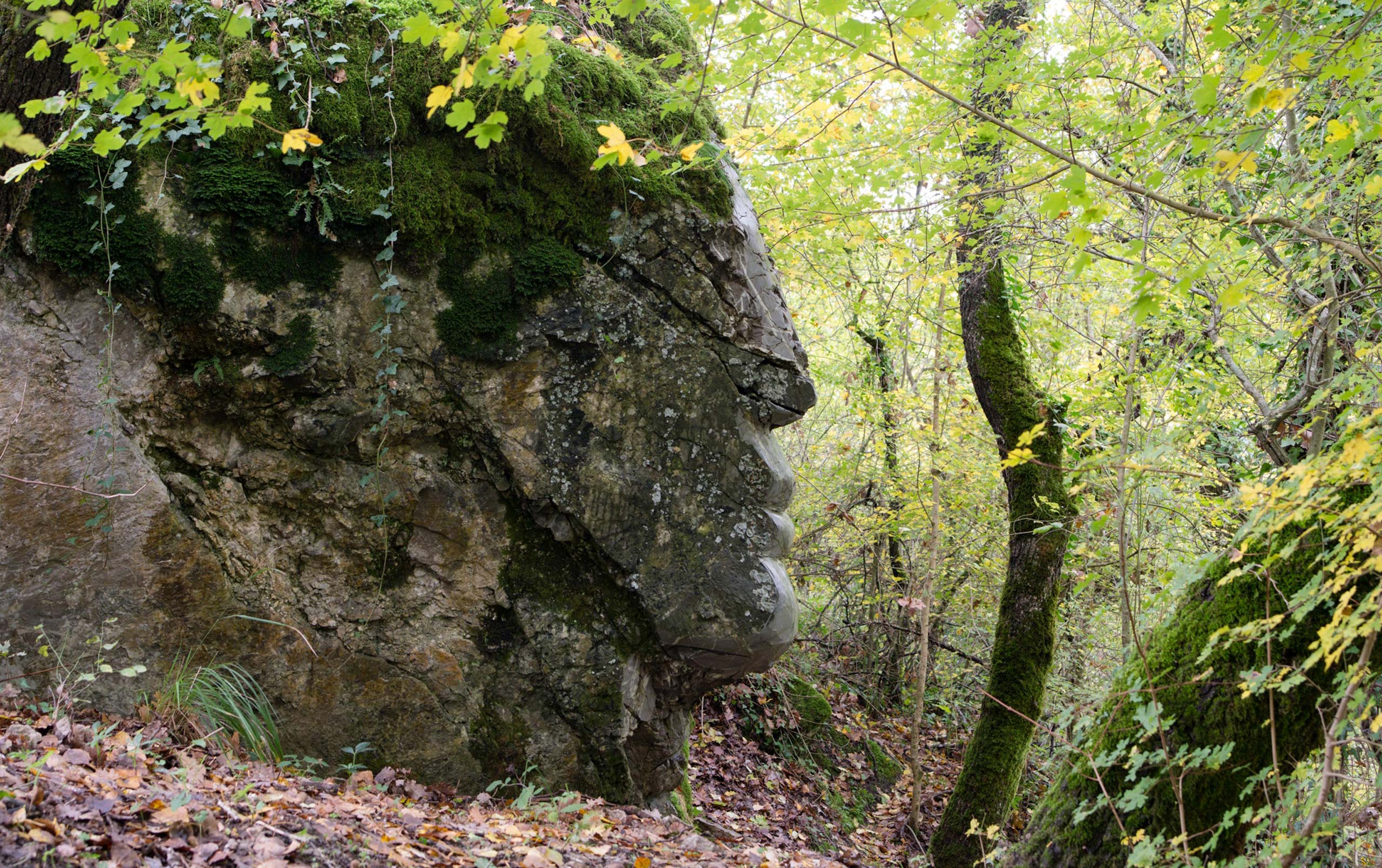 When I first started carving pieces of stone, I was constantly saying to myself: this is extraordinary – what on earth am I doing? I seem to know what to do, how to find a form I like, but how, why, what for? What is it that is happening when I carve stone? Many answers came, none the final one: but the best answer is – I am doing Nature’s bidding. I am a part of Nature, and I am a manifestation in human form of her creativity; me carving stone is one of the infinite ways nature expresses itself. I am compelled by everything that I have ever experienced, or was born from, or know about, to do this, here, now…

There is a story told in every piece of stone that is more magnificent than any creation myth; it’s a story that shocked and astonished the Christian geologists of the late 1700’s in England, when they first started to decipher, through the fossil record, the history of life on Earth. Then, through learning to read the tracks and traces of the cataclysmic and remorseless geological changes that formed the planet, this story was uncovered which led directly to the computing of the true age of the Earth, the Solar System, our galaxy and the Universe. The science we depend on in our everyday lives is tied in, inextricably, to that history of learning to read the fossil record, in the stone, in the land.

So here we are, integral parts of the natural world, acting as natures’ agents, infinitesimally tiny players in the vast cosmos. In my particular little corner, when I carve a face into the stone, I seem to be acting out my self consciousness onto the stone, a stone that holds some of the history of the globe, formed of the very same original kind of material that I am formed of – a process begun billions and billions of years ago in the origins of our universe. I put a little modern consciousness back onto nature, who made both me and the stone. I carve the stone into familiar forms, carrying with them an emotional charge; the forms are beautiful, the stone broken. The expressions of sadness, of reflection, are easy to read – I like to think that anyone who ever lived on Earth, anywhere, any-when, would recognise these forms, and the expressions.

These expressions, and the breaks, showing there on the pieces of old stone, also tell another story: there is in our human nature, fully created by the laws of Nature, something urgent, always desirous for more, a short-sightedness and self obsession that while being born of necessity, of survival, now appears to lead to self destruction: this self-destruction has two effects: one, we destroy, profoundly change, our physical habitat as we strive to feed this infinite desirousness, and two, we lose our dignity in that process. Our dignity is made of care, of a rational and feeling response to our surroundings, to the land, the sea, the mountains, the air and of course our fellow creatures, both human and all the other inhabitants of Earth. The whole of the rest of the natural creation in fact.

So my work is a kind of temple activity now, devotional; when I work a piece of stone, the mineral occlusions of the past are revealed, the layers of sediment unpeeled; I may open in one knock something that took millions of years to form: dusts settling, water dripping, forces pushing, minerals growing – material and geological revelations: the story of time on Earth shows here, sometimes startling, always beautiful.

What is this beauty? The shapes I impose on the stones are formal, discs, waves, the shape made by a planet as it moves through time around the heavens, or the familiar faces and bodies of my own species; graceful, strong, thoughtful, reflective – there are no huge mysteries here, nothing particularly demanding.

But the stone itself, that’s something else. The loveliness, power and strength in the stone is the raw beauty of nature herself; I can put a more or less familiar shape onto it, like a suit of clothes, and then eyes can look in and see what has been there for millions or billions of years, made with water, made with fire and gravity, made with time; majestic and ancient, and alien, our ancestor, part of that from which we came.

And along with this readable embodiment of the past, comes a sense of the inexorable drama that is the Earth’s history, the almost incomprehensible passage of time. The Earth behaves as she must; she is acted upon and obeys the laws of Nature. But we, mankind, the most complex thing in the known universe, now turn on our creator, our mother planet, changing her into a different, less hospitable place.

We walk blindly into our future, seeing the past, but seemingly unable to understand the depredations we wreak on the land, the air and the sea, the harm we do.

The average Westerner doesn’t see or suffer much of these changes – we suffer the age old pains of Death, disease and loss; we may hear a bit in the news, but our supermarkets are well stocked, our banks and corporations profiting; we may have heard that in the global South the deserts are growing, or the floods are destroying the fields, or that the glaciers are melting. We hear that perhaps the Amazonian forests will soon be too dry not to burn: that when the polar ice caps melt, the seas will rise up onto the land: that the global South will be hardest hit: that we may well survive quite comfortably, those of us with money and choices, and that the African poor will not. Oh.

So these old stones, that tell us the story of the Earth, the studies of which pushed away the confines of superstition and ignorance, these old stones will outlive us, and remain like the ruins of a lost civilisation. In case technology doesn’t sort the problems, and we don’t all make it through to a happy future, these stone carvings will lie waiting to be read in some future-scape of strangeness, and be a memento of us, and a memorial to us.

The Earth is and has been so powerful, so wild, so completely the source and the surrounding of all that we are and are capable of – a long view of it shows it to be utterly beautiful and utterly rare. But our primitive respect and our physical sense of her honour is crumbling. And somehow we have become the gun that we shoot into the hearts of the innocent. We destroy, and as we destroy, we watch ourselves dancing and weeping on their graves.

And so I protest, in stone; I want people to imagine what we will look like to posterity, how we would judge ourselves if we had such vision, and what we would do differently now: I want to speak down the years and tell the future of that bit of it’s past that was us – about what happens in our hearts now – about our surprise, our fear and sorrow, and shame – our apology. These pieces can be seen as memorials to a lost future, to lost wildernesses, to lost innocence; to the pointlessly, needlessly dead.

And also they can be testaments to our desperate dream, to somehow make it better again – that I am, we are, sorry, angry, forlorn, for the Earth and for ourselves.

I carve in stone the fierce need in millions of us to retrieve some semblance of dignity for the human race in its place on Earth. We can show ourselves to posterity as a pitiful and brutal life form – that what we are best at is rapacity, greed, and wilful ignorance, and we can also show that we are creatures of great love for our whole planet, that everyone of us is a worshipper in her temple of life.

There is a great story told of how our ancestors were the best, the most successful hunters and warriors and breeders; the cleverest, most creative strategists; the lucky; the survivors, who were also the best poets and singers and story tellers. We are their descendants, and here’s another story, in stone. Our past is gone; our future is endangered. Here are stony tears, pathos, and passion; a subtle memory of stillness, of joyful surrender to nature: a dignity.

The alabaster we use is a very fine gram gypsum (a hydrous sulfate of calcium). It is found in nodular form in limestone beds in Italy and Spain. Age of stone varies. Hardness 2*

This stone is limestone, quarried in Dorset. It was formed in the Upper Jurassic period, i.e one hundred and forty million years ago. It is made up of millions of tiny compacted shells. 140 million years old. Hardness 3

The term chalcedony refers to a wide variety of microcrystalline forms of quartzite. It forms in caves and spaces in rocks of different types, especially volcanic rock. Much chalcedony develops at low temperatures, as a residue from slowly dripping silica-rich water. Its colouring is highly varied, resulting from the different types of mineral the water has seeped through. 600 million years old plus. Hardness 7

Quartz and quartzites are the hardest commonly found stones on Earth; they are made of crystallised silicates, like sand and are t~e source of a wide variety of semiprecious stones. The colours are amazingly various. 500 million to 3.5 billion years old. Hardness 7

Royal blue lapis lazuli, the gem variety of lazurite, is one of the most beautiful opaque gemstones. It is a sodium and aluminium mineral of considerable complexity. It is quarried in northern Afghanistan from the late Archean Sar-e-Sang deposit. Pliny the Elder described the stone as ‘a fragment of the starry firmament’. 2.4 to 2.7 billion years old. Hardness 5.5

This stone is from India. We know little about it. We suppose it to be a riverine stone: There was at some point in history a violent event, an eruption, which shattered a silica rich substrate; a river rolled and rounded the remaining shards on a long journey downhill to create the beautiful phenocrysts, the pebbles, so evident in the now polished surface. These pebbles became encased in a super fine grained matrix stone, formed in an ancient clay river bed. Age Unknown. Hardness varies.